Ice clogs the canals of Venice

A view of the Cannaregio channel, partially iced because of unusually low temperatures, in Venice on Monday. Schools will be closed in Rome on Tuesday, as Italy copes with unusually heavy snow for the Mediterranean country.

So far, ten deaths have been linked to winter weather, including two people who were crushed under a collapsed roof south of Rome, and a 91-year-old woman in the northeast port of Trieste who was knocked down by strong winds. In the north, rescuers had to pluck people from their homes, as piles of snow reached 3 meters (10 feet) in some areas. In Milan, Italy’s fashion and financial capital, temperatures fell to 10 degrees Fahrenheit on Monday, and the authorities opened a section of the city subway to shelter some 100 homeless people.

A boat floats in a frozen lagoon in Venice on Monday. Bitterly cold weather sweeping across Europe claimed more victims on Sunday, brought widespread disruption to transport services, and left thousands without power with warnings that low temperatures would continue into next week. 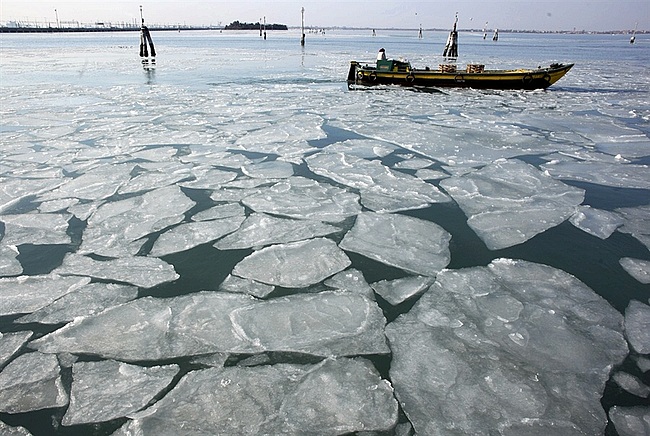 A small boat passes on a canal covered with ice on Monday in Venice.